New Horror out on DVD this Week... Finally, My Name Is Bruce 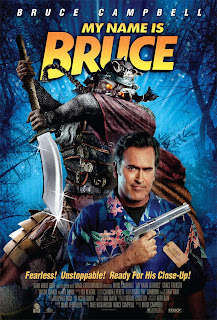 Another great week for new horror releases, basically because "My Name is Bruce" is finally getting released this week. So, might as well get right to it... and, as usual, if you want to buy one of these, click on the title and get it through Amazon. Also, if you want to see all the trailers, head on over to our Youtube page and check them all out...

Okay, let's cut the shit and get right to the release of the week. I'm a big Bruce Campbell fan... I mean, who doesn't quote "Evil Dead" as a major influence and/or respect the whole relationship that he has with the Raimi brothers? Seriously, I love the fact that Sam Raimi is one of the most respected filmmakers of our generation right now and he STILL puts Bruce and Ted in every film... even though the films that Bruce and Ted do on their own could be considered, well... retarded. Take "My Name Is Bruce

", for example, which is CLASSIC Bruce Campbell. Bruce plays a sleazy version of himself, who, after being harassed and mistaken by fans to, basically be Ash, is abducted from his trailer home to fight Guan Di, a Chinese war deity. F'ing awesome... just reading that plot line makes me think I'm back in film school for some reason. Now, a lot of naysayers thought the film was a disaster, as it was screened over a year ago, but then... nothing. It turns out that the truth is quite the opposite. Apparently, after the studio that financed it, saw it... they gave them more money to do a second shoot, so they could beef it up and go to the theaters with it. Anyhow, it's destined to be a classic and there's already a sequel in the works.

" is written, produced, directed by and stars Anthony Brownrigg. He also shot it, edited it, did the visual effects and was one of the camera operators. Oh... and he also designed the website. WTF? Talk about going at it yourself! I'm going to have to try to get in touch with this guy... anyhow, it's an award winning film, having got the 'best feature film' award at the World Horror Convention, among others. It looks like it's a violent horror-comedy and it's got a very intriguing plot. Jim is a down and out writer, who's forced to write a horror film... and he finds a muse, an undead girl named Victoria... who decides to teach Jim about horror by killing his friends and family. So, can Jim finish his horror movie to Victoria's approval before she kills everyone he knows? Wow, love it.

"Otto; Or, Up With Dead People

" is written and directed by Bruce La Bruce and created a bit of buzz throughout the festival circuit and, really, what gay zombie film hasn't? La Bruce has actually made a whole bunch of real gay porn, so it doesn't come as a surprise to find out that this film "contains extreme zombie sex". The film is about an underground filmmaker who is finishing up an epic political-porno-zombie movie, when he runs into Otto and starts to film him... they discover parts of Otto's past, such as the details of his ex-boyfriend, and they arrange a meeting between the two in the schoolyard where they met... with devastating results.

I hate it when they change a good title to a mediocre title for international audiences... and this is a classic example. "Freakdog" is now "Red Mist

", which is from Irish filmmaker, Paddy Breathnach. You may remember Breathnach's last film, which I really liked, called "Shrooms". Definitely check that out, if you haven't seen it. Anyhow, "Red Mist" ALSO looks pretty good, it's about a young doctor who administers a powerful drug to a coma victim, but instead of curing him... it triggers an out-of-body experience that enables the patient to inhabit other people's bodies and, subsequently, take revenge on the bullying medical students who were responsible for his condition.

" comes from David Ondaatje and it's his first film in around a decade... his last film was "Waiting for Dr. MacGuffin". "The Lodger" is based on a novel, which I've never heard of... but that doesn't mean much. I don't read fiction novels. Hell, I barely read non-fiction. However, it's the same novel that Hitchcock based HIS version of "The Lodger" off of. Anyhow, it's got a decent cast, with Alfred Molina, Simon Baker (now well known because of "The Mentalist"), Donal Logue, among a bunch of others... So, the film has two converging plot lines: the first involves an uneasy relationship between a psychologically unstable landlady and her enigmatic lodger; the second is about a troubled detective engaged in a cat-and-mouse game with an elusive killer.

" comes from multi-award winning French director, Agnes Merlet and, although I haven't seen it, it's getting great reviews and is being likened to "The Excorcist". It's about a psychiatrist who's sent to a small island village (sounding very "Wicker Man"-like, so far) to work the case of Dorothy Mills, a teenaged girl who tried to strangle a baby. The psychiatrist diagnosis her with multiple personality disorder until the day that Dorothy speaks with the voice of the psychiatrist's dead son. I'm definitely intrigued.

" is the sequel to the very unscary "Are You Scared?", which came out in 2006. They did manage to get Tony Todd in this, but I'm not sure it'll save it... I'm sure you'll get a lot of what you got in the first movie, which was the whole 'reality show horror' thing.
Posted by Dead Harvey at 9:20 AM

[b][url=http://0503500010.com] Escort Israel[/url][/b]
Barby-Girls is an Escort Agency providing female escorts services.
We have a full portfolio of the most elegant and stunning girls that you ever likely to meet in Israel.